Шаблон:Infobox Brand Humber Limited was a British manufacturer of bicycles, motorcycles and motor vehicles incorporated and listed on the stock exchange in 1887. It took the name Humber & Co Limited because of the high reputation of the products of one of the constituent businesses that had belonged to Thomas Humber. A financial reconstruction in 1899 transferred its business to Humber Limited.

From an interest in motor vehicles beginning in 1896, the motor division became much more important than the cycle division and the cycle trade marks were sold to Raleigh in 1932. The motorcycles were withdrawn from sale during the depression of the 1930s.

Humber is now a dormant marque for automobiles as well as cycles. Following their involvement in Humber through Hillman in 1928 the Rootes brothers[1] acquired 60 per cent of Humber's ordinary capital, sufficient for a controlling interest. The two Rootes brothers joined the Humber board in 1932 and began to make Humber the holding company for vehicle manufacturing members of what became their Rootes Group.

By 1960 annual production was around 200,000 vehicles. Previous insistence on Rootes family control, however, may have led to under-capitalisation of the business. Building a brand new car, the Hillman Imp, proved beyond Humber and Rootes Group resources and their businesses were bought by the Chrysler Corporation in 1967. 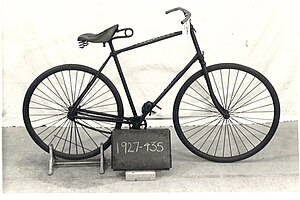 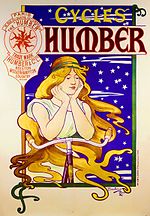 The cycle industry was consolidating in the late1880s and partners Thomas Humber and fledgling company promoter T Harrison Lambert sold their Humber Cycles business to investors who added a number of other substantial cycle manufacturers[note 1] and then floated the new combine on the stock exchange.[2] Such was the public's recognition of Humber products and their high quality and reliability the whole new organisation was named Humber & Co Limited though Humber's was not the largest component. Thomas Humber agreed to manage the whole enterprise with its works in Coventry and Wolverhampton as well as Beeston. He retired in 1892 at the end of his 5-year contract.[3]

Humber expanded into Europe and in 1896 their subsidiary, Humber (France), joined with La Société des Vélocipedes Clément and La Société des Cycles Gladiator obtaining stock exchange listings in order to form "one of the largest Cycle monopolies in Europe" and with the intention of improving the position of Humber (France). The directors expressed the greatest interest in the new industry of motor carriages and cycles for which extensive works were to be erected by the monopoly at Levallois Perret. At the time of the flotation prospective investors were told that agencies were already established in all principal towns in France, and the cities: St Petersburg, Copenhagen, Milan, Athens, Brussels, Bucharest, Amsterdam, Lisbon, Buenos Ayres, Santiago, Constantinople, Algiers, Sfax, Tunis, Alexandria, Saigon, Hong Kong, Port Said and throughout the whole of South America. The chairman of the new monopoly was chairman of Dunlop Pneumatic Tyre Co and another director was the manager of Dunlop (France). Negotiations between the parties were completed by Ernest Terah Hooley.[4]

The ambitious new monopoly was not successful, disputes between the partners dragged through the English courts until the turn of the century. A severe economic recession in 1899 then brought about a financial reconstruction and the incorporation of a new company, Humber Limited, to continue the existing business.[5]

In 1896 Humber built a prototype and nine production motorcars in their new Coventry premises. In November 1896 a car was exhibited at the Stanley Cycle Show in London. They are claimed to be the first series production cars made in England.[6]

At Humber & Company's next general meeting in 1897 the managing director said they had received many letters asking if they would produce a motorised vehicle, and that they had in fact been working on this project for 2 years, but had delayed production until they found a suitably reliable engine. Having now found an engine they were gearing up for production.[7]

The first Humber car was produced in 1898 was a three-wheeled tricar. Their first conventional four-wheeled car appeared in 1901. Cars went into production in Beeston near Nottingham as well as Stoke, Coventry but to separate designs. Just as with bicycles Beeston Humber products retained their high quality image. The Beeston works closed in 1908 on the opening of the new works at Stoke.

Cycle manufacturers
to the King, 1903

On 12 March 1908 the new works was officially opened at Stoke, then just outside the city of Coventry. New buildings covered 13.5 acres and allowed for the employment of 5,000 hands. The new works was designed to be capable of producing 150 cars and 1,500 cycles per week.[9] Another financial reconstruction was made in 1909.[10] In 1911 they took over the Centaur Cycle Company.[8]

By this time a wide range of cars was produced from the 600 cc Humberette to several six-cylinder 6-litre models. In 1913 Humber was second only to Wolseley as the largest manufacturer of cars in the United Kingdom. Revived by the war Humber produced motorcycles and bicycles for the War Office as well as cars.[8]

There were postwar slumps in the early 1920s and in addition the public were moving from pedal cycles to motorcycles as well as to cars. Rover, Singer, Swift, Triumph and Riley all gave up their manufacture of cycles.[8]

In 1925 Humber moved into the production of commercial vehicles with the purchase of Commer. In 1929 Hillman, under the control of the Rootes brothers, was added but Humber's independence ended in 1931 when the Rootes brothers bought a majority shareholding with the financial support of Prudential Assurance and providing their Hillman shares as part payment.

There was a resurgence in domestic and export demand for pedal bicycles and in February 1932 Raleigh acquired all the Humber cycles trade marks. Manufacture was transferred to Raleigh's Nottingham works.[11] Raleigh-made Humbers differed from Raleighs only in chainwheels, fork crowns and some brakework.[12]

The Ryton on Dunsmore plant which closed at the end of 2006 had originated in 1939 as one of the so-called shadow factories: the Ryton plant was originally built to produce aero engines. At Speke, Liverpool, another shadow factory opened in April 1939 assembled bombers. Armoured cars, scout cars and staff cars were made in the existing factories along with much other war material [14]

General Montgomery, Commander of the British and Allied forces in Northern Africa during the Desert war of WWII, had two specially built Humber Super Snipe four door open tourers made with larger front wings or guards, mine proof floors, special fittings and long range fuel tanks. Two cars were built for him and used in the Africa campaign against General Rommel, who used open tourer large, long range Mercedes Benz's. Montgomery's Humbers were known as 'Old Faithful' and the 'Victory Car'. Both cars still exist in museums in England and are a testament to the high engineering and manufacturing standards of Humber and Rootes Ltd. The victory car drove Montgomery and Churchill through the streets of London during the VE parades at the end of WWII.

In the postwar era, Humber's mainstay products included the four-cylinder Hawk and six-cylinder Super Snipe. Being a choice of businessmen and officialdom alike, Humbers gained a reputation for well appointed interiors and solid quality. The Hawk and the Super Snipe went through various designs, though all had a "transatlantic" influence. 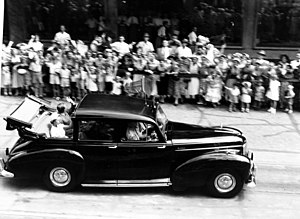 In 1960 Rootes was the world's twelfth largest motor corporation by volume, its annual output nearly 200,000 cars, vans and trucks. They employed some 20,000 people. The group had 6 million square feet of manufacturing space and owned nine assembly plants outside Britain. They were involved in car hire, hire purchase and driving schools and even made air conditioners. There were about one thousand dealers in the UK. The two Rootes brothers remained in control of their group from their adjoining suites of offices in Devonshire House, Piccadilly.[14] The ground floor Rootes showroom on Piccadilly is now an Audi showroom.

The success of BMC's Mini made Rootes speed the development of their own small car. A new assembly plant was planned but government was obliging major employers to build new plants where there was surplus labour. Jaguar solved their expansion problem by buying Daimler and its Coventry plant with experienced workforce but Rootes selected a greenfield site by Pressed Steel body works near Glasgow airport in Scotland, at Linwood near Paisley.[14]

The new factory was officially opened in May 1963 and the new rear-engined Hillman Imp went on sale the next day but there were difficulties with industrial relations and, soon, the Imp's reliability. The Imp's heavy development expenses and slackening sales to USA brought about losses for the Rootes group in both 1962 and 1963.[14]

A last major activity of, by then, Lord Rootes, was to open sale negotiations with Chrysler Corporation. He died in December 1964. Chrysler took control in 1967.[14]

The last of the traditional large Humbers, the series VA Super Snipe (fitted with twin Stromberg CD 100 Carburettors) were sold in 1968, when Chrysler ended production. Several V8 models had been in pre-production at this time, but were never publicly sold. Several of these test examples survive today.

Humber's and Rootes' last new car was the second generation of Humber Sceptre, a variant of their Rootes Arrow model. The marque was shelved in 1976 when all Hillmans became badged Chryslers.

The Hillman Hunter (another Arrow model) badged Chrysler until production ceased in 1979 when Chrysler's European division was sold to Peugeot and the marque renamed Talbot. The Talbot marque was abandoned at the end of 1986 on passenger cars, although it was continued on vans for six years afterwards.

There is a thriving club, and many of these upmarket cars survive today.

The world's largest collection of Humber cars can be viewed at the Marshalls Post-Vintage Humber Car Museum in Hull. It includes 21 Humber cars dating from 1932 to 1970 on permanent display, plus 24 unrestored cars.[16][17]

When Queen Elizabeth, the Queen Mother visited Western Australia in the 1950s, a Humber was shipped over for her. It was left in a paddock, and was rediscovered and verified in 2002. It has since been restored and is currently privately owned.

Humber produced a number of aircraft and aero-engines in the years before the First World War. In 1909 the company signed a contract to build 40 copies of the Blériot XI monoplane, powered by their own three-cylinder engine,[18] and four aircraft were exhibited at the Aero Show at Olympia in 1910.