Horch was a car brand manufactured in Germany by August Horch & Cie, at the beginning of the 20th century.

It is the direct ancestor of the present day Audi company, which in turn came out of Auto Union, formed in 1932 when Horch merged with DKW, Wanderer and the historic Audi enterprise which August Horch founded in 1910.

The Horch brand is currently owned by Daimler AG, who retained it in 1964 when it sold Auto Union to Volkswagen.

History at a Glance 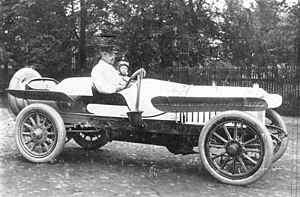 The company was established first by August Horch and his first business partner Salli Herz on November 14, 1899 at Ehrenfeld, Cologne.[1] August Horch was a former production manager for Karl Benz. Three years later in 1902 he moved with his company to Reichenbach im Vogtland. On May, 10th, 1904 he founded the Horch & Cie. Motorwagenwerke AG, a joint-stock company in Zwickau (State of Saxony). The city of Zwickau was the capital of the South Western Saxon County and one of Saxony's industrial centres at that time.

After troubles with Horch chief financial officer, August Horch founded on July 16, 1909, his second company, the August Horch Automobilwerke GmbH in Zwickau. He had to rename his new company because Horch was already a registered brand and he did not hold the rights on it. On April 25, 1910 the Audi Automobilwerke was entered in the company's register of Zwickau registration court. Audi is the Latin translation of horch, from the German verb "Horchen", which means "Listen" (compare English "hark"). The Audi name was proposed by a son of one of his business partners from Zwickau.[2]

Both companies from Zwickau (Horch and Audi) were unified in 1932 with Zschopauer Motorenwerke J. S. Rasmussen (brand DKW) and the car producing piece of Wanderer to Saxony's Auto Union corporation. The Silver Arrow racing cars of the Auto Union racing team in Zwickau, developed by Ferdinand Porsche and Robert Eberan von Eberhorst, driven by Bernd Rosemeyer, Hans Stuck, Tazio Nuvolari, Ernst von Delius, were known the world over in the 1930s.

The company initially began producing and twin-cylinder engine automobiles near Cologne in 1901.

The first Horch had a engine, with an alloy crankcase, a unique achievement in those days. It had an open-body design, with lighting provided by lanterns with candles in them. In contrast with the powerful cars of later years, the first Horch could barely reach a top speed of . It was significant at that time because it used a friction clutch, and also had a drive shaft to power the wheels.

The firm soon ran into financial troubles, not surprising considering the pioneering nature of the automobile business at that time. Horch had to seek new partners.

In March 1902, August Horch produced a four-cylinder car with a shaft drive in Reichenbach in Vogtland. Horch cars were consideredШаблон:By whom more advanced and superior to those being then built by Mercedes or Benz (who were then separate manufacturers).

By 1903, Horch had built a car with a four-cylinder engine. In March of the following year, he introduced his new car at the Frankfurt Fair.

In 1904, August Horch developed the first six-cylinder engine, which appeared in 1907. In 1906 a Horch automobile driven by Dr. Rudolf Stöss from Zwickau won the Herkomer Competition (equivalent to a 'brand-name' world championship at the time). In the 1920s, Moritz Stauss, a cosmopolitan Berliner, was the principal stockholder of the Horch company. He succeeded in making the Horch brand highly desirable by introducing art into the advertising of their products. He recognized that only a brand emphasising Horch's unique characteristics would be successful.

In 1909, the supervisory board (the German equivalent of the Board of Directors) of the corporation forced out Horch. Horch went on to found Audi as Audiwerke GmbH, which became effective on 25 April 1910. The name was a solution to the legal dispute with his old company over use of the Horch brand and a clever play of words ("audi" is the literal Latin translation of the Old German "horch", meaning the imperative "Listen!").

In 1928, the company was acquired by Jørgen Skafte Rasmussen, owner of DKW (from the German Dampfkraftwagen, or steam engine vehicle) who had bought the remains of the US automobile manufacturer Rickenbacker in the same year. The Rickenbacker purchase included their manufacturing equipment for eight-cylinder engines. 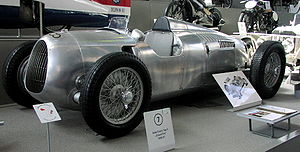 Eventually, on 29 June 1932, Horch, Audi, DKW and Wanderer merged to form the Auto Union AG, Chemnitz affiliated group. The current Audi four-ring logo is the Auto Union logo that represents the merger of these four brands. In the 1930s, Horch introduced a new line of smaller and cheaper, but still presentable, V8 automobiles. In 1936, Horch presented the 25,000th 8-cylinder luxury car in Zwickau.

The Auto Union Grand Prix racing cars types A to D, were developed and built by a specialist racing department of Horch works in Zwickau between 1933 and 1939. Between 1935 and 1937 Auto Union cars won 25 races, driven by Ernst von Delius, Tazio Nuvolari, Bernd Rosemeyer, Hans Stuck and Achille Varzi. 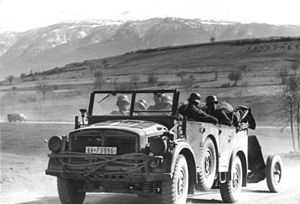 Auto Union became a major supplier of vehicles to the German Wehrmacht, such as Heavy standard passenger car (Horch 108), Medium standard passenger car (Horch 901 and Wanderer 901) and Half-track Sd.Kfz. 11. Civilian production was suspended after March 1940. After the war the Auto Union AG at Chemnitz was dissolved and in Ingolstadt, West Germany the new Auto Union GmbH was founded, where civilian car production continued. Due to widespread poverty in postwar Germany, only small DKW vehicles with two stroke engines were produced. After Auto Union was purchased in 1964 by the Volkswagenwerk AG, the old brand Audi was introduced again, together with the new four stroke vehicle Audi F103. Daimler-Benz retained the trademark rights to the Horch brand, and has remained dormant ever since.

During the Second World War, the factories suffered heavy bomb damage. Later, the advancing Soviet forces captured the area, and it became part of the Soviet sector of divided Germany in 1945, and later became part of East Germany. 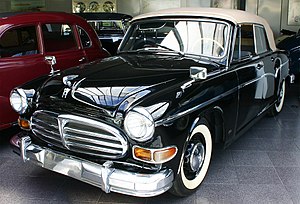 From 1955-1958, old Horch factories produced the Horch P240, a 6-cylinder car that was respected at the time. The former Horch and Audi operations from Zwickau were unified in 1958. A new brand, Sachsenring, within the East German corporation IFA was born. After unification in 1958, the P240 car was renamed as the Sachsenring P240. As the Soviet Administration inexplicably banned the foreign exportation of the P240, the East German economic administration decided to stop production of the vehicle. IFA also produced the initial Trabant "P-50" model from 1957.[3]

The Zwickau site was acquired in 1991 by Volkswagen, effectively restoring its connection with Audi.

In the late 1930s, Horch supplied a limited number of promotional scarves bearing the Horch logo. Sent only to the wealthiest drivers, it is a major collectible amongst diehard enthusiasts of the pre-war car era. However, there is also a degree of controversy associated with these scarves as they were commonly sought by senior SS members.