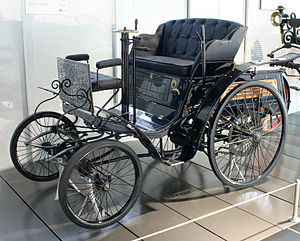 The Arnold was based on the Benz Velo (pictured)

The Arnold was one of the first motor cars manufactured in the United Kingdom. It was produced in East Peckham, Kent between 1896 and 1898.

William Arnold & Sons of East Peckham, Kent, was an agricultural engineering company founded in about 1844.[1]

In 1895 they acquired a licence to build Benz cars. As the Arnold Motor Carriage Co. from 1896[2] to 1898.[3] the firm built twelve cars patterned after the Benz but fitted with their own engines.[4] Two Arnolds were exhibited at Crystal Palace in 1896.[3]

One Arnold from 1896 was fitted with the world’s first self-starter, by electrical engineer H. J. Dowsing. This was a dynamotor coupled to the flywheel, designed to assist the car on hills and well as starting the engine,[1]